Professor Alan Stancill teaches in the Accounting and Information Systems department at Virginia Polytechnic Institute and State University. In the Spring 2014 semester, he participated in this study by using ORION in his ACIS 2115: Principles of Accounting course. The in-person course had 85 students in one section. All students, by course requirement, had sophomore standing.

Professor Stancill provided students with the opportunity to use ORION, but he did not include the score in the course grade. Students had the opportunity to engage with up to 12 chapters of content. Three-quarters of the students attempted at least one chapter, with one quarter attempting more than nine chapters. Overall, the typical student attempted nearly five chapters. Students spent an average of 85 minutes using ORION, with half of them using it for longer than one hour. Students ranged in their performance in the diagnostics.

Professor Stancill required students to complete online homework using WileyPLUS for the course. There were 12 assignments in WileyPLUS that counted toward the final grade, making it a priority. Students performed quite well in WileyPLUS, averaging an A across their WileyPLUS assignments. Over three-quarters of the students earned an A on their work in WileyPLUS, and 90% earned a B or higher.

Many students earned a C in the course, with an overall average of 1.97 on a 0.00 to 4.00 scale. Nearly one-third earned at least a B, though few earned an A. Engagement with both ORION and WileyPLUSshowed an impact on the grade. Students who engaged with ORION’s assessments did much better in the course, averaging a C+ versus a C- for those who did not engage as persistently. The differences in course performance among the tiers of WileyPLUS are even more stark. Students who averaged an A in WileyPLUS earned a C+ overall, while those who averaged a B in WileyPLUS only averaged a C-/D+ overall. Struggles in early tasks within ORION and WileyPLUS are indicative of future struggles in other graded components. 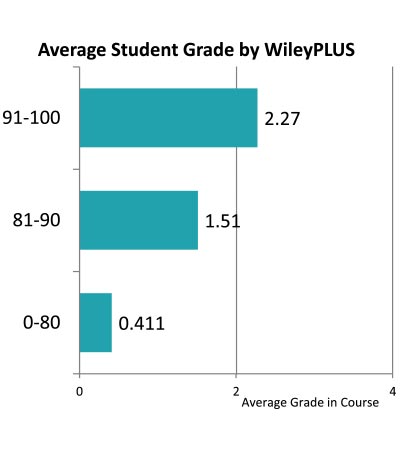 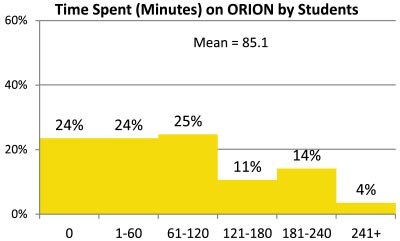 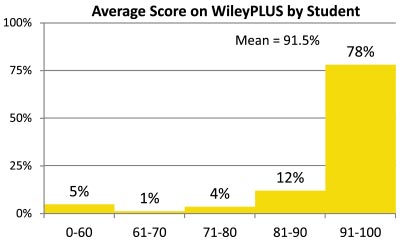